Last Tursday evening I was at DevDays’s GeekNight 2010 in The Hague… and it was fun!
For some reason the keynote (by Tony Krijnen and Daniel van Soest) began later as planned… but it was well worth the waiting. Here are the guys in action: 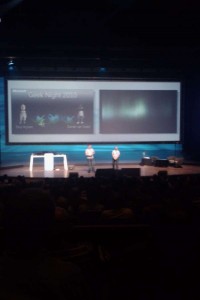 As you can see (very tiny on the big screen behind them) they have their avatars on it from their XBox.
Now this GeekNight is all about “social media” … so what has an XBox have to do with it?
The magic word in this case is:”intregration”! From your XBox console you can connect to FaceBook and view your friends photo’s, search on tags, etc. Basically everything you can do over FaceBook in a webbrowser, now you can also do that laying in your chair with your XBox.
Now I don’t own an XBox (please don’t slap me) but even I can see how this is handy 🙂

And ofcourse Microsoft Office 2010 was mentioned. Who runs the beta already? I do, loving it!
Now in Microsoft Office Outlook 2010 you can make an easy connection to Facebook, LinkedIn, etc… all kinds of social media you can now intregrate with your contacts in Outlook!
Now that’s darn cool! I’ve got several social media accounts (LinkedIn, Tagged, Hyves, etc.) and now I can easy see easy who has a LinkedIn… and is on my Connections list.
Finally I can get all my contacts together in one application: Outlook. From there you can mail them, look at their profiles on the websites but without actually having to open an Internet browser.
I’m always a sucker for less clicking so… i like it!

IT Professionals and Developers. Most of the times those are worlds apart… yes, they all work in IT.. but have completely different tasks, and skills.
For example, programming a game. Developers can code just about everything when IT Professionals can’t (at the same level). Perhaps some scripting or perhaps they’ve designed their own version of PacMan in Basic… but not even near the things a true Developer can do.
Microsoft is bringing out an easy-to-use application in which you can use the GUI to create games without ever having to see any code whatsoever.
From what the demo shown us it was a childs-game… but I think that if the community (which there is…) get started then there can be funny games developed by IT Professionals, and not only for children 🙂

And we had a scoop into Windows Mobile 7… Charlie Kindel was flown over from the USA to give a short demo/talk about it. He showed us some cool stuff but I haven’t got pictures from it… was to busy putting as much info as possible on Twitter!  (excuse for need more time to make a proper post about it and because I haven’t got any pictures I will need to search the Internet for them).

And just to blow off some steam there was some physical excercise (GuitarHero 5) after the KeyNote: 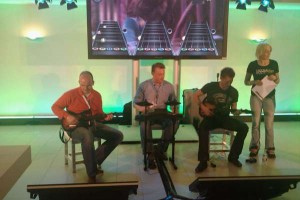