My visit to the Microsoft Netherlands Company Meeting

Some time ago I got contacted by a Microsoft employee from The Netherlands asking me if I would be interested to ‘speak’ at the Company Meeting from Microsoft Netherlands in Amsterdam.
This because he considered me to be a ‘Microsoft enthusiast’… I guess he had a point there

It also was the first time EVER that Microsoft NL allowed non-Microsoft employees to attend the company event and I feel honored that I was chosen for this.

The idea behind my invite was a concept named “Super Promoters”.
The concept in simple terms: If you have happy customers that are enthusiastic about your services/products eventually you wouldn’t need a sales department anymore because those customers like showing off your products

Now come on, you have to agree that something like that would be pretty darn amazing… no more sales peeps!

The day begins
So… Thursday last week it was time. I got out of my bed, drove to Amsterdam and as usual I was way… way to early. One of the first things I did was to sign a Non-Disclosure Agreement (NDA).

My thanks to Microsoft NL for specifically telling us what content was NDA (since a lot of the content wasn’t!) so that I am certain that I won’t post anything violating that NDA.
Me being there too early gave me the time to talk to other Microsoft enthusiasts (about 25 in total) that accepted a similar invite and to a few Microsoft employees I knew from previous encounters whom were also attending.

The keynote was done by a bunch of people each taking turn, from the director of Microsoft NL up to a woman responsible for the corporate communication and more… all of whom gave a story about how they experience the new interface in Windows 8.
So, not very technical but still inspirational nevertheless.
Before the keynote started I was expecting something like the videos from Steve Ballmer at the Microsoft Company events that are on YouTube… some guy running around, shouting, screaming and just acting plain crazy. No… let me re-phrase that: I was afraid something like that would happen.
So, the keynote unfolding as it did was a huge relief for me since I don’t like people acting crazy like that… maybe I’m weird but I like it when people speak with passion but with a sense of normalcy. We hare a saying in The Netherlands that translates to: “If you act normal your acting strangely enough already”.

After the keynote all attendees were split up into 5 groups, each having their own schedule for the day.
Now, all 25 non-Microsoft attendees had the pleasure to be ‘free’ to attend whatever session they liked at the time it suited them

The events
The schedule of each group contained 5 events… of which the table discussion, the OEM avenue and the X-NDA-X were three.
The OEM avenue was a room where a lot of the OEM partners were showing off their products for Windows 8… I can tell you that those partners are coming up with some pretty cool stuff!
The X-NDA-X lane… yeah… well… it’s NDA

Anything more than “Wow, Amazing, Cool, iWannaHave!!!!” would be a violation of my NDA

So I’m sorry, you’ll just have to wait until the stuff becomes public

The table discussion is what I am able to talk about… so more about that later in this post… just keep on reading.

The stage
Although you can consider the set-up as ‘on stage’ it is probably not what you would expect. Let me describe the setup (for all you Dutch folks, it’s the set-up as used in the talkshow ‘De Wereld Draait Door’): 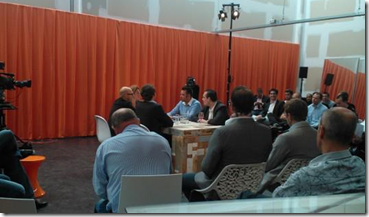 You put a rectangular table in a room and chairs in a big circle around it (at least 3-4 meters between the chairs and the table).
Next you let about 3-5 people sit at the table and let them discuss the topic where the “table lord” is sitting at the end of the table where he/she can control the conversation.

In this case there were 5 separate table sessions, each taking about one hour. So for all the groups of Microsofties, the table session was one of five events in their schedule.
The questions were about our connection to Microsoft, about our opinion and experiences with Windows 8, Windows Phone 8… basically everything why we love Microsoft

I was in the 4th session which gave me lots of time to look around the place and visit the other areas of the complex… among others that very, very nice NDA session.
So, after the lunch it was my time to sit at the table…

One thing none of the people in the audience knew was that I received a phone call the night before from one of my customers whom had a small issue about their production environment; it was down.It took us the entire night to get the environment up and running again so when I got home at 05:15 I could have gone to bed… but chances that I wouldn’t wake up 45 minutes later at 06:00 were pretty big

So I took an energy drink, watched a long overdue TechEd video on Channel9 and at around 06:15 I took off towards Amsterdam.

By the time I was sitting at the table I had been awake for approximately 32 hours straight. My hands were shaking from the coffee I had throughout the entire day, but my mind was clear… very clear indeed.
So, the conversation started and within 5 minutes they got to me. I still wonder if they regret getting to me so early in the conversation because when I get to talk about something I’m passionate about… I simply go all out! That is something I  know that about myself so I made a short response to the question “What my connection is with Microsoft?”… The woman leading the conversation was a little surprised about that and made the remark “That was short! You know that we are in a TALK show, right?”.
Like I write before, my mind was very clear at that time so I responded “I don’t need to be big about something when I can do it short and powerful… we could finish the entire conversation within 10 minutes.”

I noticed that she was a little surprised by that remark so I stopped teasing and soon we got to the subject of “Windows Phone”.

A few months ago I was aked by Microsoft to join “The Grill” which is a program where Microsoft gives you a device, in my case a Nokia Lumia 900,, for about 10 days to test and play around with. One of the first tests I did was something I got from a video on YouTube… where the jam a nail into some wood with the screen of the mobile phone! After The Grill I was very pleased with the phone… but since I had to give the phone back to Microsoft I bought my own only a few days later…

So when they asked about my opinion on Windows Phone I referred to that test about the phone, nail and wood… and the entire room was laughing…

Matthijs Hoekstra (developer evangelist from Microsoft) responsible for evangelizing Windows Phone in The Netherlands was sitting right in front of me in the audience! I just had to make use of that… just couldn’t resist

Only a few seconds later someone made a remark where I saw a chance to grab my phone and show an app… it’s called ‘My Rubber Duck’ and it’s developed by HIM (pointing at Matthijs).
My Rubber Duck is an application Matthijs has developed to show the easy of which people can develop applications for Windows Phone… the functionality of the app? It’s a picture of a rubber duck and when you touch the screen you hear the sound when you squeeze a rubber duck. Bloody brilliant!

The other conversation leader immediately picked up a microphone, walked to Matthijs and asked him what the **** possessed him to develop such an application… so Matthijs explained his motivation and told us that the app has been downloaded over 6500 times already. (!!!)

The closing session was amazing… we even got to see a TV commercial for Windows 8 that had never been shown before. I must say, short by very powerful and a darn catchy tune behind it

Conclusion
I am very thankful that Microsoft has allowed me to witness and experience such an event. From the NDA stuff and the Windows 8 commercial video up till the keynote and table session… I loved the entire experience